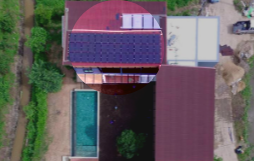 The Problem is Familiar

The climate in northern Thailand is very pleasant during the winter season. But outdoor swimming pools are quite uncomfortable during the cold season, if not heated. An indoor pool has to be heated nearly all year round, even in the hot season. Heating of swimming pools is an ideal application for solar energy. Not very high temperatures are needed, but large quantities of water have to be heated, so it make sense to operate such an installation with a large flow rate at relatively low temperature level. 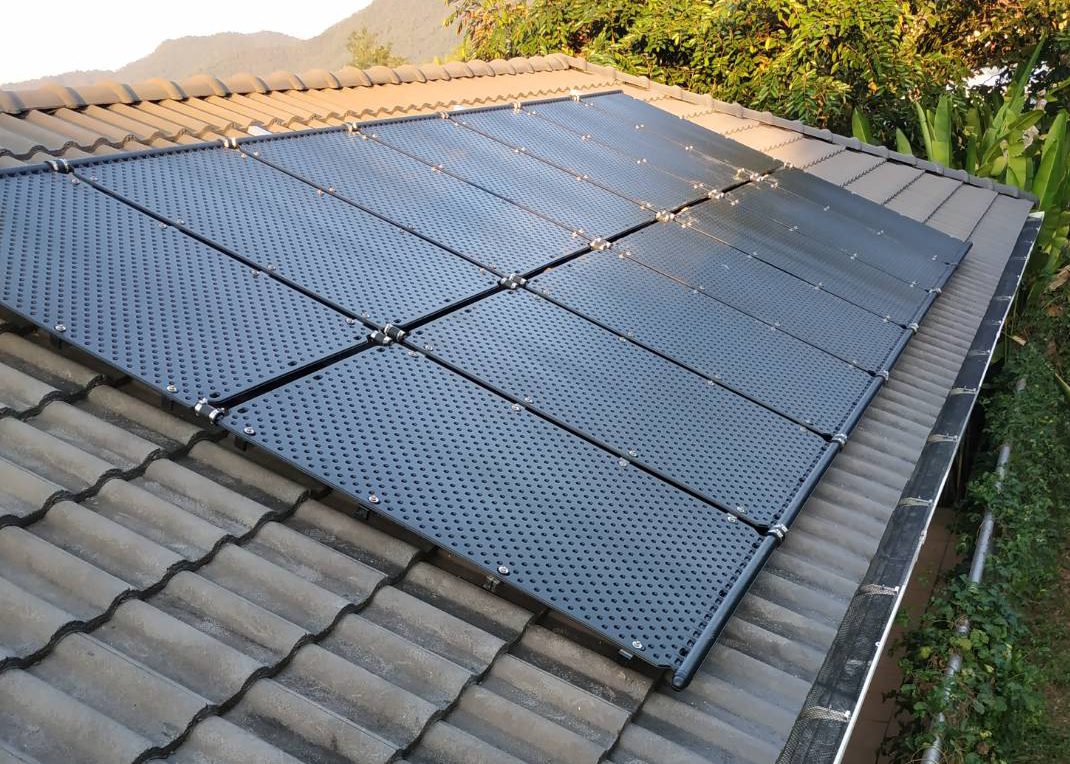 The solar pool heaters for pools are enjoying increasing popularity. They are extremely efficient, inexpensive to purchase and can usually be operated with the existing pool pump in the sand filter system.

This means that in such cases there are no additional electricity costs and the solar collectors heat your pool in an environmentally friendly manner.
The solar mats absorb the solar radiation and transfer the heat gain directly to the pool water. It makes sense to operate the pool heating with a large flow rate at a relatively low temperature level. In this way, you achieve optimum efficiency with your solar system.

OKU absorbers for solar pool heating are absolutely frost-proof and therefore also suitable for installation on flat roofs. The solar absorbers are chemical-resistant, salt water-resistant, easy to assemble and suitable for self-assembly. In addition, the absorbers made of HDPE are 100% safe against animal bite.

The OKU solar absorber contains high molecular weight polyethylene. Suitable for installation to generate warm water for the pool from solar energy It has been in development since 1975. A long period of time is the guarantee of the quality of the product.

OKU absorbers can be categorized into three types according to their installation style. Each type of OKU absorbers is used according to the installation design. To suit the needs of hot water compared to the amount of water in the pool. Item no.1000 is suitable for installing Solar Pool Heating Systems with 2 rows or more, with one side connected to the water pipes for water circulation. In the pool, Item no.1001 is suitable for installations that have more rows. Because it looks like a connector They are often used for installation together with Item no.1000 for more efficient operation and Item no.1002 are absorbers with welded pipes to circulate water in both upper and lower pools. Single row It should be designed and installed by someone with expertise

The swimming pool water can be the OKU -Absorbers in every direction flow through. The assembly is both lengthwise and widthwise possible. Connection of the individual rows of absorbers according to Tichelman (same Routes for each row). We recommend no more than eight absorbers to connect in series. interpretation Recommended absorber area in% of the pool area for outdoor pools with cover or indoor pools (early May to late September). Temperature increase 4-7 ° C compared to unheated swimming pools.

If there is no cover, the absorber area should be 50% larger will. The regionally varying hours of sunshine can be increased with or Discounts of up to 20% of the absorber area can be taken into account. Pump performance A flow rate of 150 to 250 l / m2 absorber area per hour is recommended. The required pump type can easily be determined. The delivery rate is calculated from the absorber area x 200 l. The funding amount results from the height difference between the water level and the absorber field plus approx. 5 m surcharge.

Operation with Filter Pump or with Separate Pump

This configuration can usually be selected if the absorbers are not to be set up higher than 6 m above the surface of the water. A threeway motor ball valve has to be integrated into the pressure line of the filter installation. Because of a differential-temperature regulation the ball valve is operated whenever the absorber tem-perature is higher than the temperature of the water of the swim-ming pool. The filter stream is then pumped through the absorbers. The warmed water flows back into the filter circuit by a T-junction. This configuration is suitable for large pools where the filter pump is operated all day long.

In many cases it may be sensible or even necessary to install a separate circulation pump for the solar heating. For example if the absorbers are to be set up higher than 6 m above the surface of the water.
For small pools and also to save energy the filter may operates only for limited periods during the day, while the water heating should circulate whenever the sun shines. The water is diverted from the filter installation by a T-junction and pumped through the absorbers by the auxiliary circulation pump. This pump is switched by the differential temperature regulation to ensure that it only runs to actually win energy. It is usually advisable to integrate non-return valves in both the solar and the filter circuit.

This configuration is chosen when the filter piping is difficult of access. The water is sucked out of the swimming pool by an im-mersion pipe, pumped through the absorbers, and the warmed water is conducted back into the swimming pool. Here too the differential temperature regulation ensures that the circulation pump only runs to win energy. If the pump is mounted above the water level and the delivery head is more than 5 m, a non-return valve should be incorporated.

However, there are many options to control the circulation pump (e.g. by a light sensor which only operates at intense light or by an thermostat switch in one of the last panels in the cycle.)

The water of the swimming pool can flow through the OKU absorbers in either direction, so they can be mounted both lengthwise and side by side. The individual rows of absorbers are connected using the same routes for each row. It is not advisable to connect more than seven absorbers in series.

The following graphic allows you to calculate the space requirement for your OKU pool heating system. Each absorber panel covers an area of about 1.1 m²

pool parts and accessories OKU Obermaier in Germany offers a range of accessories and control equipment. To keep the transportation and importation cost low it is recommended to select carefully which options are really needed and which can may be replaced by parts locally available in Thailand. It makes   not much sense to import PVC water pipes from Germany! However not all pipe standards are same (Germany = Millimeter, Thailand = Inch), therefore it is may necessary to individually adapt some connections.

The general rule in Chiang Mai area is that solar absorber panels (collectors) should face due South at an angle of about 20 ° to the horizontal, and be in a position without shadow. Optimal positioning of panels maximises performance. Key basic factors are direction and angle of panel position. Other factors include any shading on site, seasonal climatic considerations and periods of high and low usage. In the northern hemisphere collectors should point South, or as close as possible. Roof mounted panel direction will be dictated by the alignment of the roof. If the alignment is more than 30 ° from due South the panels would probably be better ground mounted to ensure full South orientation. In northern Thailand, at latitude approximately 18 ° to 19 ° north of the equator, the sun actually shines from the North for about two months. During this period South orientation is not optimal, but solar radiation is at its highest level during the year, which compensates for this effect.

As a general rule of thumb, the angle of orientation should be the same as the latitude of the site. So in Chiang Mai, 18.5° latitude north of the Equator, collectors should ideally be mounted with an angle to the ground of 18.5o°, also about 20°, and face South. Solar absorption is optimal if the collector is at right angles to the sun’s radiation. For example at mid-day on the equator on the spring equinox on March 20 and autumnal equinox on September 22 the collector should theoretically be parallel to the ground, thereby being at exactly 90° to the sun directly overhead.

The maximum solar insolation rate for Chiang Mai is reached in mid of May and the end of July when the sun stands at mid-day exactly vertical to the ground. In practice a compromise angle is selected which optimises overall daily solar absorption without the need for a complex system to constantly reposition the collectors in relation to the changing position of the sun. To maximise winter absorption rates the angle would be about 40° This would reduce summer collection, but this can be advantageous in some circumstances as it reduces the risk of over-heating at that time of year. For hospitality use where winter visitors are higher than in rainy season there is a case to increase angulation rate up to 40° to maximise winter hot water harvest.

In early morning and late afternoon solar radiation is much lower than at mid-day. In mid-summer radiation is stronger than in mid-winter and in winter the requirement for heating is generally greater than in summer time, due to changes in ambient water temperature and relative cooling rates at different times of year. In Chiang Mai area winter sunlight is almost continuous but in rainy season there is extensive cloud cover. Taking account of all of these factors, it remains the case that South orientation and angulation of 20 °  optimises performance in this part of the world. However, if your roof angle is within 10 ° +/- of your desired angle you can just mount the solar collector flushing against the roof surface. The added trouble of adjusting the collector to a precise angle will not result in a great improvement in efficiency. Solar water collectors have generally a very high efficiency of about 92% to 96%, for that we can afford some losses.

Insolation rate is a measure of how much solar energy strikes a square meter of horizontal surface per day. In Thailand the rate is about 5 kWh/day (kilowatt hours per day), one of the highest rates in the world. In consequence a correctly sited collector in Thailand will collect more energy than practically anywhere else. This makes the economics of solar water heating in our area very attractive on a world comparison basis. A relatively small collector will absorb as much energy as one twice its size and cost in say Europe.

Solar absorbers can harvest more heat than is required on occasions. For instance with low usage rate, holidays and protracted sunshine at mid-summer, the temperature of the stored water can approach and even achieve boiling point, with negative consequences. Letting the system stagnate is not ideal as high pressure and temperature can build up. The correct design of the system with a pressure relief safety valve will result in vented steam or small amounts of wasted water. If necessary the simplest way to prevent seasonal over heating is to shade the collectors when appropriate.

The water circulation system of swimming pool can help you keep the temperature of swimming. Water will keep the quality of water. Swimming creates a balance of water and body temperature. You can swim confidently throughout the year. The long-term investment is because the solar collector system is environmentally friendly